Auburn-haired, blue-eyed Bridget Hanley was born in Minneapolis, Minnesota on February 3. When her dad, former All-American, Lee Hanley, joined the Marine Corps, the family moved to Cherry Point, North Carolina. Having lived through a near-fatal attack of virus pneumonia as an infant, 2 1/2-year old Bridget next boldly sat on the back of a swamp alligator (and lived through that!)

Bridget moved with her parents and older sister, Mary Jo, to Edmonds, Washington, north of Seattle, where she chopped wood, mowed lawns, raised ducks, buried ducks, played football, baseball, tennis (and lived through that) before deciding to become a young lady at 14!  The switch of roles from rowdy tomboy to dainty miss came about the day she was asked to join the male track team!
It was also at that age, recalls Bridget, that her thoughts turned toward plays, (writing parts for herself), dancing, piano and boys -- in that order.

By the time she reached Edmonds High School, Bridget was Cheer Leader, president of the Drama Society, member of the Scholastic Honorary Society, as well as belonging to the school orchestra, band and choir.  She also served on the Student Council, but confesses she had to stay after class in chemistry.
Bridget recalls she graduated from high school with a sigh of relief before hurrying off to San Francisco College for Women "I almost didn't live through that!" she laughs. After keeping the drama coach in tears for two years, she returned to Washington and entered the University.
Bridget graduated with honors and a BA in drama, after having appeared in 17 major productions, ranging from Shakespeare to Arthur Miller---and getting a "D" in Oceanography.

On her way to New York, the budding actress headed for San Francisco, where she lived in a funny, one-room apartment she nicknamed "Tacky Towers."  Bridget landed a part as a bronchial French maid in Noel Coward's "Private Lives" and was earning a grand total of $20 a week, but it was her step into professional theatre, and eventually led to the lead in "Under the Yum Yum Tree."  This role brought her to San Diego and finally Hollywood.
"I had two dresses, and no money," recalls Bridget,  "but lots of hope, ambition, and love for my work. I quickly learned to adore smog, cheap potatoes, lettuce, air conditioners, interviews, and the unemployment line."

This soon changed, and Bridget became a busy young actress, guesting in such series as "Hank", "Gidget", "Farmer's Daughter."  She also appeared in an ABC pilot, "Pirates of Flounder Bay" before signing with Screen Gems in 1966.
While under contract to Screen Gems, Bridget appeared in most of the studio's series, as well as co-starring with Fred Gwynne in the NBC-TV pilot,
Guess What I Did Today?"  Bridget confesses she always felt herself right for the role of "Candy" in "Here Come The Brides" and she fought for it, but she didn't land the part until numerous girls had tested. Today, all agree that nobody but Bridget could have played  Candy.

Bridget is especially proud of the first "gold record" presented to her by Joan Blondell and the cast and crew when she had to sing "Annie Laurie" in a second season episode of "Brides."  "I may not be good, but I was loud!" 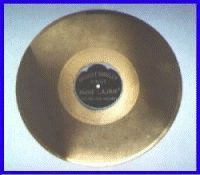 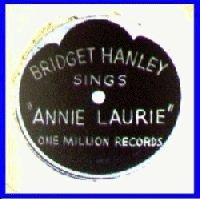 She's also pleased that the new character of her little TV sister is named Molly after her real-life little sister. "You can guess who was responsible for that." laughs Bridget.
"Oh yes," she smiles, "While at Screen Gems, I met a marvelous director named E. W. Swackhamer, a brilliant artist and wonderful human being. We were married on April 26, 1969, after a whirlwind courtship of two-and-a-half years. Now I have the longest name in show business--Mrs. Bridget Ann Elizabeth Hanley Swackhamer."
To date, Bridget, the new bride, has three cookbooks and has purchased the first piece of furniture for her new home---an antique bathtub.

Bridget Hanley Swackhamer sums up her goals like this: "I want to continue acting--learning--loving life--(and my husband).  Even though I hate to get up early, I'm the luckiest girl in the world when that alarm rings at 5 a.m. ---because I'm going to a job I've prepared for all my life.  Happiness is acting in a series you love!"